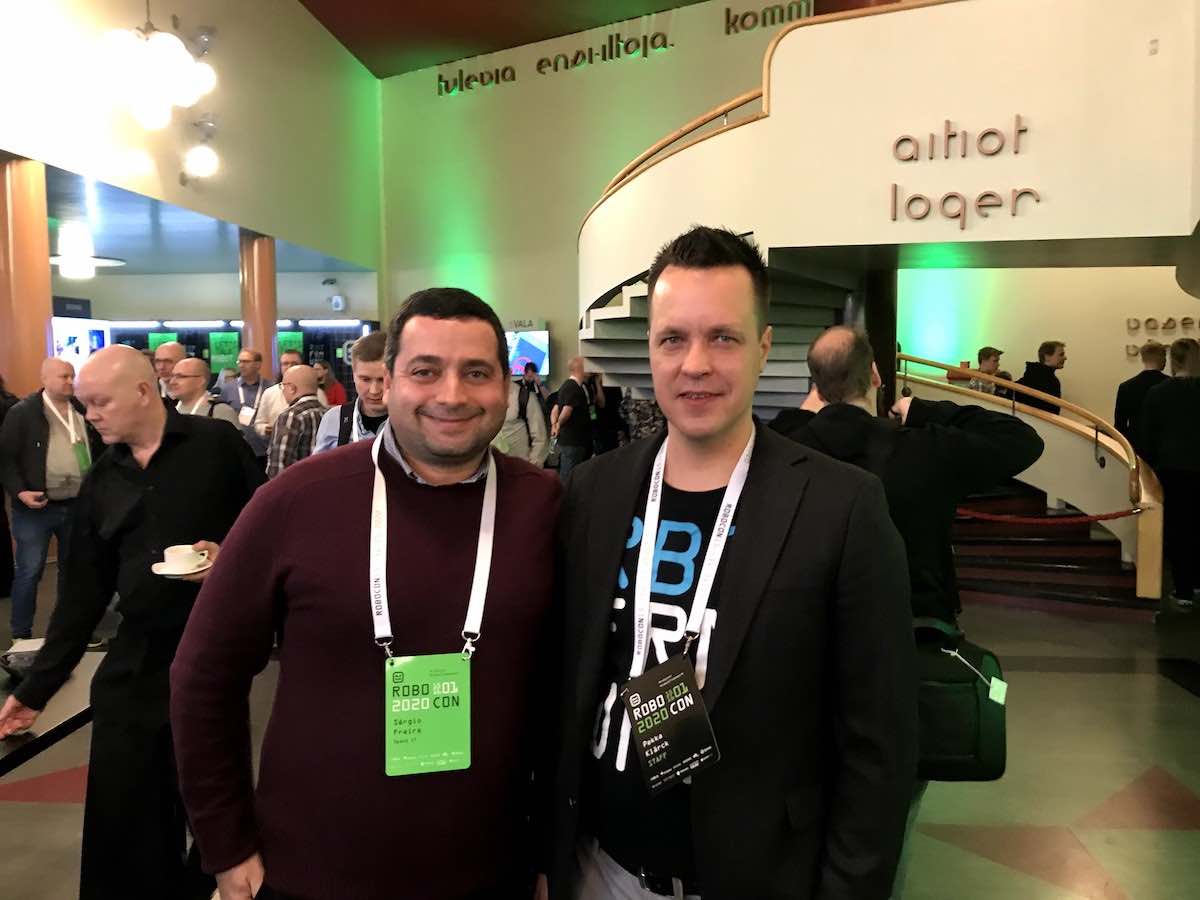 I was lucky enough to attend Robot Framework's annual gathering, the 2020 edition, in Helsinki with the amazing Robot community. In the picture above you may see me together with Pekka Klärck, the "father" of Robot Framework; he is a very open person and a great contributor for the whole RF ecosystem. But before going into the conference details, let me start by talking about a preliminary workshop I had. I attended a workshop entitled "Advanced SeleniumLibrary and Robot Framework" with Ed Manlove, Tatu Aalto and also the collaboration of René Rohner and Jani Mikkonen. I've not only learned about some advanced topics including extending SeleniumLibrary, but also there were some discussions about broader topics, such as how to manage web locators in an effective and scalable way.

Honestly, I was so glad to see my humble contribution to SeleniumLibrary during the workshop; glad that it is useful for the community (available from the upcoming v4.2 onwards).

There were two important messages that I consider to be quite interesting and relevant, especially considering the scope of the workshop : the fact that the maintainer of SeleniumLibrary project, Tatu Aalto, mentioned that he does very very few GUI based tests in his own case the general agreement that GUI/selenium based-tests, though interesting, should not be the main focus of testing; concerning automation, API-based tests give a lot more value (of course, on top of unit tests); this requires that testability is built into the product, right from the start During the workshop, René was very helpful and active, helping keeping it interesting for everyone.

What concerns the event, overall RoboCon was interesting, fun and motivational. There were many different presentations though, at least this year, I found RPA to have emerged as its own kind of topic (first conference day had many RPA tracks). E2E, GUI, and microservices testing were also covered in the presentations. I found out the talk about acceptance testing a real-time audio application (by Akseli Lukkarila, Yousician) fascinating as it depicted a scenario where instead of seeing docker containers you would see wooden boxes as different audio-dedicated test environments.

There were also other interesting presentations, covering data-driven testing (René Rohner) to more implementation topics, such as how to implement test automation in a more traditional organization with all typical challenges that we would expect (Anaïs van Asselt). In-between talks, we had a bunch of breaks, giving the opportunity for people to rest, stretch their legs and do some networking.

Even though there were people from foreign countries, most attendees were Finnish. Thus, most conversations in the breaks happened in Finnish (at least my impression); I think this could be improved if the organization promoted English as the main language that should be used (note that all presentations and the workshops were in English). This would ease people joining on-going conversations, IMO.

I also think that all presentations should have the Twitter handle of the presenter or any other relevant contacts. But these are just some small things, some nice-to-have. Talking about improvements, one of the challenges RF seems to yet face is good support for IDEs so they can provide autocomplete thoroughly. Gladly, we all became aware after Pekka's keynote that showed that this should be addressed right after RF v3.2 is out later this Spring.

But what have I learned?

These are some things that I learned at RoboCon or that were somehow reinforced in the back of my mind:

What concerns more techie things, I wanna try out some libraries afterward, namely:

I want also to explore ways of extending RF and some libraries in the ecosystem.

After RoboCon ends, a kind of call-for-action is somehow triggered in us. I'm eager to learn more about additional topics, libraries and... who knows... perhaps make some related open-source contributions later on? :)

I still had some last time to do Santa's work :)

Thanks for reading this article; as always, this represents one point in time of my evolving view :) Feedback is always welcome. Feel free to leave comments, share, retweet or contact me. If you can and wish to support this and additional contents, you may buy me a coffee ☕